A godsib was originally a person connected to you through baptism sponsorship; i.e. a godparent. The meaning extended over the centuries to connections through godparents, then to close friends and family, and finally to friendly acquaintances. As with many words, the noun form also came to mean the action performed with that noun. So, casual conversation had between with godsibs came to be called gossip.

Part of the fun of the SCA is learning to do things the way they would have in period, so here is some casual conversation you can use when gossiping with godsibs at your next event.

This was originally going to be one article. But each language requires information on pronunciation, as well as usage and conjugation, so I decided on a series. I also hope that readers will interact, ask questions, or even request specific languages.

But first, a disclaimer.

Most native English speakers struggle with the conjugations in other languages. Dealing with gendered nouns and making all the words that need to agree with each other can be very confusing. And it seems we’ve always felt this way because we’ve been simplifying it since before it even could be considered English.

Modern English has lost most inflections and conjugations. When speaking languages from period, however, the gender(s) and number of people speaking must be reflected. I have tried to present this in the easiest form possible, and apologize for any undue confusion. Feel free to contact me with questions or concerns and I’ll cite my sources if you’d like to do further research on your own.

I actually found more than I expected to on Old Norse. Aside from the course at the University of Texas, there is also Old Norse for Beginners at https://notendur.hi.is//~haukurth/norse/ and lots of great basic phrases (and taunts) at https://oldnorse.forumotion.com/t8-basic-phrases.

In these, it’s the time of day being referenced so they’re not dependent on your audience.

A note on pronunciation. I could go really in depth with this, but here’s a simplified version from https://tattuinardoelasaga.wordpress.com/2014/08/09/pronunciation-of-old-norse/ (which also has an awesome video of a guy in a cowboy hat reading Edda excerpts). 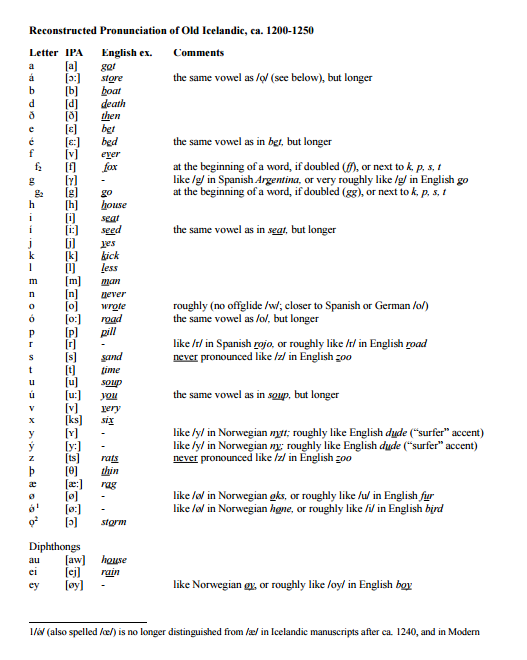 And a few fun and more colorful expressions.